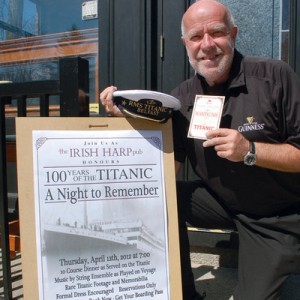 A night to remember in Niagara on the Lake, Ontario, Canada

On April 10, 1912, the RMS Titanic, dubbed the ‘unsinkable ship,’ set sail from Southampton, England, with a final destination of New York City, N.Y. Operated by White Star Line, at the time of her maiden voyage she was the largest ship afloat, carrying 2,224 passengers, including some of the wealthiest people in the world.

However, five days after its departure the ‘unsinkable’ ship collided with an iceberg in the North Atlantic and did what no one thought possible: it sank. More than 1,500 people died in what many call one of the deadliest maritime disasters in history.

Over the years the legend of Titanic and her story have lived on through movies, literature, and song. For many, including Trevor Smyth owner of The Irish Harp Pub in Niagara-on-the-Lake, the mystery surrounding the ship has proven to be a lifelong fascination.

This year marks the 100th anniversary of the Titanic’s first and last journey. To mark the occasion, Smyth is hosting a Titanic-themed dinner event, “A Night to Remember.”

His King Street pub will be transformed into the luxurious surroundings of the first-class dining hall, with replica dishes and table linens, servers dressed in period costume, and the exact 10-course menu that was served on the ship the night before it sank. Courses include lamb in mint sauce, roast duckling, Lyonnaise chicken, filet mignon Lili, roasted squab and cress and more. Smyth said they turned to the Titanic Historical Society for help understanding some of the outdated menu items, like vegetable marrow farci and punch romaine.

“We wanted to make it as authentic as possible,” said Smyth, who admits he’s had a lifelong fascination with the Titanic.

Growing up in Ireland, Smyth said he was always intrigued by the stories about the ship built in Belfast at Harland & Wolff, the world’s biggest shipyard at the time.

“I was always reading books and doing research on the Titanic,” he said, adding he was drawn to the many myths surrounding the ship and also the unanswered questions.

“Why were there not enough lifeboats, how did so many people die, why didn’t any of the other boats in the area get there quicker?” he rambled off, listing some of the questions that haunt people interested in the ship’s legend.

Some of those questions, he said, experts will attempt to answer during the question-and-answer portion of the night. Music will be provided by a string ensemble playing selections that would have been heard aboard the ship. There will also be rare footage of the Titanic’s departure, and memorabilia including letters from survivors and replica items.

Space will be limited for the event, with only 50 spots available. Smyth said seats are filling up fast and many of the guests have already indicated that they too will be coming dressed in costume. While it’s not a requirement, Smyth does encourage attendees to wear formal dress.

In lieu of tickets, guests will be given a reproduction of the White Star Line boarding pass that would have been used to board the Titanic.

“It’s going to be a great evening,” said Smyth.

The April 12 event kicks off at 7 p.m. The cost is $90 per person for the 10-course meal and evening activities.