Savour a selection of handmade chocolates with Niagara’s wines, including the world renowned ice wine.

Learn the art of pairing wine and chocolate with the help of Pillitteri’s Manager Beth Duke who will bring you some insight on how to match your favorite chocolate and wines from the Niagara region. 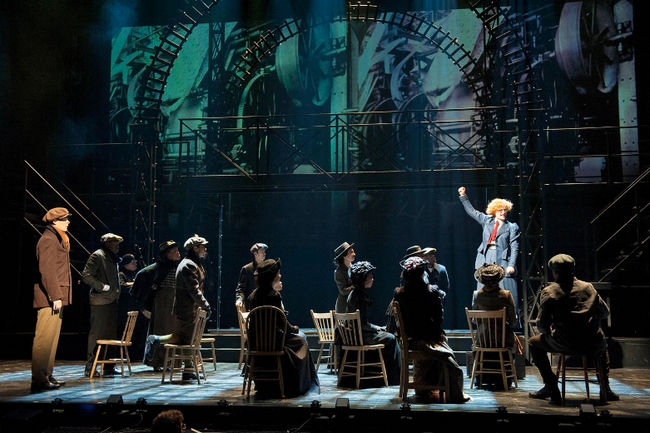 The Shaw Festival is pinning its hopes on Ragtime for the 2012 season. Early buzz and ticket sales are strong. PHOTO: Emily Cooper, Shaw Festival

This year, it feels like a new era. Most of it by design, some of it by necessity. After a year-long celebration to mark its 50th season last year, Shaw Festival artistic director Jackie Maxwell knows there’s potential for a letdown. There will be fewer galas this year, less hype, a tighter budget. And while the season offers its usual assortment of mirth, music and melodrama, Maxwell has one big gun in the holster: Ragtime.

The Tony-winning musical based on the 1975 E.L. Doctorow book (and 1981 film) was a surprise when announced last year, but Maxwell feels the socially charged show fits the Shaw of 2012 perfectly.

“After last year and all the celebrations, I started to think of this year as the first of the next 50 years,” she says. “To show we should be here for another 50 years and still maintain our relevancy.”

“I thought of Ragtime as a real symbol of that, as our anchor of the season. It contains a conversation that we’ve not had at The Shaw, the whole notion of America at the turn of the 20th century.”

Set in New York City, Doctorow’s book examines the American experience from the perspective of three families: A white upper-middle class clan; a family of Jewish immigrants; and an African-American couple. A racial incident sets off events which eventually unite the families.

The 1981 movie directed by Milos Foreman was nominated for eight Oscars, and was notable for being James Cagney’s final film appearance.

Funded by Garth Drabinsky and Livent Inc., the musical debuted in Toronto in 1996 before moving on to Broadway in 1998, where it ran for two years. Critics were lukewarm on the $11 million production, but it tallied 13 Tony nominations – the most of any show that year. It won four but lost Best Musical to The Lion King.

The show hit London’s West End for a three-month run in 2003, then returned to Broadway in 2009 (the first ‘90s musical to enjoy a Broadway revival). Despite better reviews than the original production, it closed after 65 performances because of its immense budget and moderate ticket sales.

At seven months and 109 performances (including previews), Ragtime will enjoy a longer run at Shaw than for its second stint on Broadway.

Which is music to actress Patty Jamieson’s ears. The 16-year Shaw veteran has provided solid support in shows like The Women, The Admirable Crichtonand last season’s box office champ, My Fair Lady. This time, she gets the major role of Mother in a musical she loves.

“When it was coming up last year I did a little lobbying with Jackie because I love this piece,” she says. “The character of Mother … as I’ve gotten older, I understand it (more). Fifteen years ago, I saw her as one of those ladies dressed in white. I didn’t really understand what she was going on about. But I’ve lived life, I have my own little person now, and I have more of a frame of reference.”

The Shaw’s take on the musical has earned plenty of buzz in previews. It opens May 26 at the Festival Theatre, capping the company’s opening week.

Jamieson isn’t surprised the show is already causing a stir: It was good then, it’s better now.

“The scope of the story is very large,” she says. “The original production had problems because the story got lost in a swirl of lovely music and costumes and big sets. Jackie’s forte is to clarify the story. You walk away feeling unsatisfied if you don’t understand the story.”

FIREWORK OVER THE FALLS

Free Fireworks over the Falls

Free Fireworks over the Falls every Friday, Sunday and Holiday evenings at 10pm between Victoria Day and Labour Day weekends.