Fireworks framed the General Brock Monument on Saturday, October 13, 2012. It was here at Queenston Heights by the Niagara River that a battle took place 200 years ago. A massive re-enactment of the battle was enjoyed by over 10,000 spectators. There were lots of activities and this was the day’s last event to commemorate the 200th Anniversary of the Battle at Queenston Heights and the life of Major General Sir Isaac Brock.
Fireworks by Garden City Display Fireworks in Beamsville.  Fireworks at the Brock Monument:   https://vimeo.com/51371501

This celebratory event provides an excellent opportunity to view the Portrait of Isaac Brock before it returns to Guernsey, UK in the first week of November. In addition, RiverBrink will host four artists in support of our Accessibility Campaign to fund the construction of a ramp and accessible washrooms.

This celebratory event provides an excellent opportunity to view the Portrait of Isaac Brock before it returns to Guernsey, UK in the first week of November. In addition, RiverBrink will host four artists in support of our Accessibility Campaign to fund the construction of a ramp and accessible washrooms.These artists will demonstrate in the mediums of origami, pen and ink, watercolours and oils. They will work on site between the hours of 1:30 and 3:30 on each of the days. RiverBrink Art Museum will be open from 10:00 am to 5:00 pm.RiverBrink Art Museum is located at 116 Queenston Street, Niagara-on-the-Lake (on the Niagara Parkway halfway between Niagara Falls and “Old Town” Niagara-on-the-Lake). For more information, please contact RiverBrink Art Museum by phone at 905-262-4510 or by email at info@riverbrink.org.  Looking for Accommodations during your visit? Call us at: 1-866-226-4730 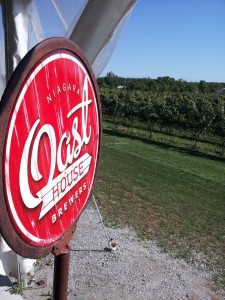 Hops and grapes in Niagara-on-the-Lake, Ontario

Brewery partners Mike Berlis, Cian MacNeill and Kevin Somerville—all from Niagara region—expect to open the doors of Niagara Oast House Brewers within the next few weeks. “Our approach complements the area’s wine and gourmet tradition while adding a whole new dimension,” says MacNeill, the brewery’s marketing manager. “Craft beer consumers have a lot in common with fine wine consumers, so Oast House is using the winery model by offering tours, tastings, and special events—including brewmaster’s dinners.”

MacNeill tells me the brewery has enlisted local farmers to grow its hops. “Like the terroir wines whose tastes vary with different soils, we plant hops in three different locations—on the bench, in the interior and by the lake,” he says. Brewmaster Kevin Somerville brings credentials from North American and European schools, and has worked at the Niagara College Brewing Program. You can follow Oast House Brewers on Facebook and Twitter.

The City of Niagara Falls Museums will again be offering our popular walking tours of Drummond Hill Cemetery during weekends in the month of October. These tours offer visitors a unique opportunity to discover another side of Niagara Falls’ history.

These night-time tours take visitors through one of the most historic cemeteries in Canada. The guides will lead performances that provide a glimpse into the lives of some of the famous and not so famous people from the history of Niagara Falls. The tours include music, theatrical scenes, costumed performers and vignettes of people who are buried in the cemetery.

Assistant Curator of the Niagara Falls Museums, Sara Byers says, “This theatrical experience is a good introduction to the worlds of community and professional theatre as well as the field of living history.”

The museum makes every attempt to provide appropriate period costumes but assistance from the volunteers is always appreciated. Tours run October 12, 13, 19, 20, 26 & 27 at 7pm, 8pm & 9pm. The tours depart from the cemetery gates located on Buchner Place off of Drummond Road.

The tour cost is $12.00 per person. Tickets are available by reservation only, by visiting the Niagara Falls History Museum at 5810 Ferry Street or by calling 905-358-5082. Space is limited, and tickets will not be sold at the door.

Photos from previous years’ events and of this year’s cast are available to media upon request.

A Walk Through History is a project of the Niagara Cultural Capital Of Canada 2012 program and funding support from the Department of Canadian Heritage and the Region of Niagara is gratefully acknowledged.

About 1,000 historical re-enactors and volunteers are expected to take part in a recreation of the Battle of Queenston Heights on Oct. 13. It’s one of the major events here in Niagara this year marking the Bicentennial of the War of 1812. Bullet News photo by John Robbins.

NIAGARA-ON-THE-LAKE – As many as 1,000 volunteers and costumed reenactors are expected to take part in a recreation of one of Canada’s most defining moments – the Battle of Queenston Heights.

The battle reenactment is just one of many events planned for the weekend of Oct. 12-14, as Niagara’s War of 1812 Bicentennial celebrations continue.

HISTORY: Descendants of War of 1812 general to visit Thorold next week

“The weekend of events planned for Oct. 12-14 will allow us to celebrate a lasting peace between two great countries,” Janice Thomson, chairwoman of the Niagara Parks Commission, said during a press conference, Tuesday afternoon near Brock’s Monument.

“It will also provide us with the opportunity to pay tribute to the sacrifices made by all of the soldiers, and native warriors of both nations who fought here and all along these lands now protected by the Niagara Parks Commission.”

Here’s a full look at the weekend’s events:

2 p.m. – Twinning Ceremony
The Queenston Residents’ Association will be hosting a twinning ceremony at St. Saviour Major General Sir Isaac Brock Memorial Church in Queenston at 2 p.m. There will be a dedication of a monument celebrating the historical, social and cultural relationship between St. Peter Port, Guernsey (the birthplace of Brock) and Queenston (the place where he fell in battle. A number of Guernsey officials will be speaking at this commemorative event.

10 a.m. – Brock Dead House Dedication. The Queenston Residents Association will be hosting a dedication ceremony at the “Brock Dead House,” located at 20 Queenston St., in the Village of Queenston. This ceremony will mark the site where Brock’s body was taken after he was mortally wounded in battle. Guy St. Denis, the researcher who confirmed the site, will be making a brief presentation of his work.

10:30 a.m. – A commemorative walking tour with Dr. Wesley Turner, author of the book Astonishing General: The Life and Legacy of Major General Sir Isaac Brock, begins. Tickets for this limited space event cost $20 and must be purchased in advance through the Friends of Fort George.

11 a.m. The public is welcome to attend a plaque dedication at Brock’s Monument at 11 a.m. on Oct. 13, where the Historic Sites and Monuments Board will be designating Major General Sir Isaac Brock as a Person of National Significance. Also beginning at 11 a.m., join the Friends of Fort George staff as they take you on a tour of the Queenston Heights battle site. Tours, which cost $5, start at Brock’s Monument. Ian Bell and a group of well-known folk musicians will play early 19th century music at the band shell. Tours and music continue through 3 p.m.

3 p.m. – The re-enactment of the Battle of Queenston Heights

5:30 p.m. – A recreation of the procession carrying Brock’s body from the heights in a horse-drawn wagon will take place.

Recreation of Brock’s Funeral Procession. Niagara-on-the-Lake. At noon, reenactors will form up at Fort George and begin their march down Byron Street to Victoria Street and then along Queen Street. The procession will stop at the Old Court House for a commemoration ceremony. The caskets of Brock and his aide-de-camp Lieutenant Colonel John Macdonell will then be placed on horse-drawn wagons and led to St. Mark’s Church and Fort George.